The May-June 2021 edition of the Carolina Alumni Review – the one with Roy Williams on the cover – included this item on “Tall” in its Books section. 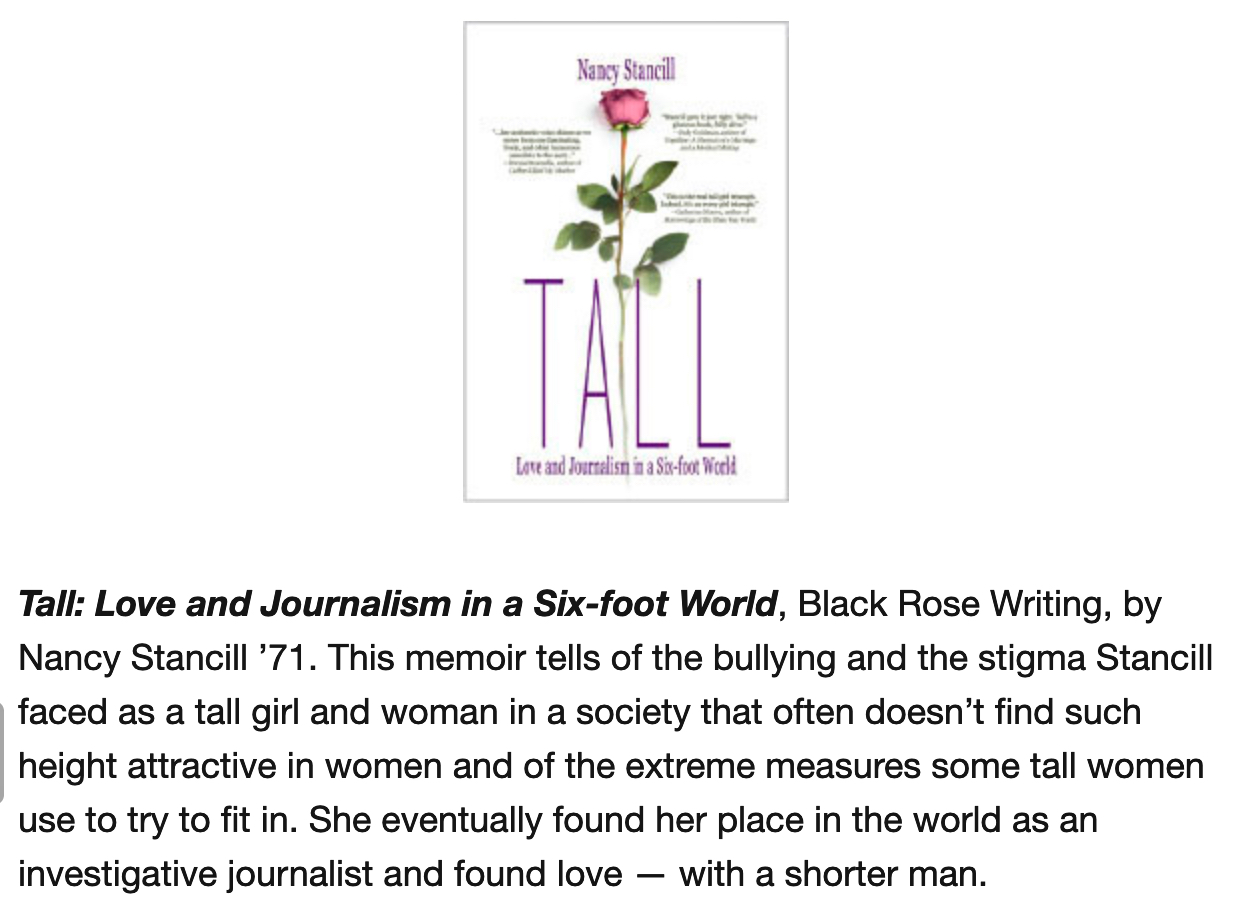 The conversation below with Charlotte podcaster Landis Wade at charlottereaderspodcast.com was recorded in February and released today. I read from “Tall” and we talked about the book.

Landis describes “Tall” as “an authentically written and compulsively readable memoir of Nancy’s life from gangly teen to investigative reporter.” The podcast includes a segment on “Investigative Journalism Tips for Writers.”

“Tall” is available at Park Road Books and Amazon and Barnes & Noble.

I wrote this poem about my mother-in-law Jaye, who died two weeks ago.

Hungry.
Stop for
a chicken sandwich.
Arrive at
the nursing home
by 1:15 p.m.

In Jaye’s room,
an attendant
tells us gently:
She passed away
at 1 p.m. 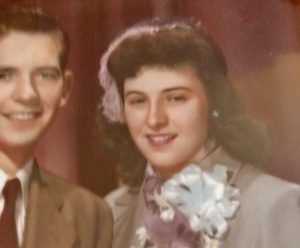 Overwhelmed
by guilt.
If only
we hadn’t stopped,
we could have been present
for the last minutes
of my dear mother-in-law’s life.

Trying to ease
our minds,
the staffer says:
She’s been in
a coma-like
state
for a couple of days.

It’s easy to see
that Jaye
is gone.
Her face
is turning
sallow.
Her body
is so, so still.

We sit
beside her
in silent
mourning.
My sister-in-law
arrives.
We hug
and sob.

A seven-year bout
with dementia
erased
the joy in Jaye’s life –
and some of the joy in mine.

Before,
she had loved me
as if I were
her child.
She praised
my stories,
my mothering,
even my cooking.

Her love for me
was unequivocal.
I loved her
the same way.

If only we
hadn’t stopped,
we could have
held her hands,
stroked her hair,
helped to ease her
into eternity.

I’ve written two novels about Annie Price, investigative reporter, and intend to write a third – someday. Readers ask me: Why take the time and energy to write a memoir when you could be working on that next piece of fiction?

The simplest answer, as Socrates said, is “The unexamined life is not worth living.”

That doesn’t mean you have to write a memoir. It does mean that you can evaluate the life you’ve led and whether it has the meaning and heft you intended. It’s never too late to make changes in a life.

Tall: Love and Journalism in a Six-foot World is definitely a memoir. I started out intending to write a sociological account of the obstacles many tall girls and women face in their journey to fit in.

My book’s first chapter is about a Swedish woman who had more than two inches cut from her thigh bones to shorten her 6-foot-1½ inch height. According to a 1964 Parade magazine article, the young nurse was ecstatically happy with the result. I searched for her online without results.

The first chapter also includes an account of girls in Australia who were treated with hormones to stunt their growth. The hormones, prescribed by doctors in league with worried parents, often resulted in tall girls’ developing reproductive problems later in life.

But I could find no concrete evidence of leg-cutting or treating with hormones in the United States. I’m sure there were incidents of hormone treatment aimed at tall girls, but the recipients have kept quiet about it.

Besides, I thought, would anyone really want to read that book?

What would be better, I decided, was to write about my own experience growing up as a tall girl and my life as a tall woman.

That overarching theme led to my accounts of searching for love and finding a profession as a journalist. For either search to be successful, I had to develop the confidence I never had as a tall teenager. That confidence was slow – but steady – in coming, as a reporter, then as an investigative journalist.

My search for love was another confidence-building opportunity, leading me from a broken engagement and another failed relationship to the man of my dreams. I had to overcome my prejudice against shorter men to appreciate that lover, now my husband, who is two inches shorter.

I wrote about my family of seven, which included a stay-at-home mother (who later became a teacher), my editor-publisher father and my four siblings. Some of my observations included embarrassment over the birth of a sister when I was fourteen, and anger about not being allowed to move into a college-bound sister’s room.

It’s difficult to write about my deceased parents without feeling some frustration and a lot of sadness. They made mistakes, particularly in their sometimes-hostile relationship with each other, but they always tried hard to be good parents to their brood of five. Largely, they succeeded.
My siblings like the book (some more than others.) Only one of the four asked for something to be taken out. She argued that particular part was their secret; not ours. I abided by her request.

Honesty is essential in a memoir and readers seem to sense when it’s lacking. I have tried to be honest throughout this book, though it’s painful to look back at such things as being teased about my tallness as a preteen.

As a journalist, at first it was difficult to allow myself to be vulnerable on the page. But I’ve found that everyone is vulnerable about something. In my case, I related my loneliness of being a first-time mother and my bitter disappointment at not being able to have a second child. I could have stayed quiet about these sensitive subjects but bringing them out allowed me to exorcise some demons.

My memoir also includes some great memories of moving as a bride to the San Francisco Bay Area and eventually relocating to the diametrically different atmosphere of Houston.

Readers say they have enjoyed sections of the memoir relating to my work as an investigative reporter, from stories about women being cheated out of fair divorce settlements to a dangerous project about the crooked leaders of a Texas community college.

“I really enjoyed that book,” a friend I hadn’t seen in a while told me. “I liked your novels, but I liked this one better because it’s real.”

A big factor in deciding to write this memoir is my three-year-old granddaughter. I hope that someday she’ll enjoy knowing more about Mimi and her life. My son enjoyed it, though, like many men, his reaction was literal.

In the middle of some serious chapters, I needed that lightness.
As I have gotten older, I’ve had an irresistible need to examine my life as a whole.

How did being tall affect that life? Did it turn out to be a plus or a minus? As I’ve tried to point out, it really depended on the circumstances. Did I live up to my potential as a wife, mother and journalist? It depended on the day, month and year. There have been a lot of highs and lows, as there are in anyone’s life.

I don’t consider my life to be close to the end. I hope that I’ll have many more adventures. Indeed, I have them all the time, new experiences that demand my attention.

I try to make the most of them.